Lady Gaga was born Stefani Joanne Angelina Germanotta on March 22, 1986 in New York City, on Manhattan's Upper West Side. She began playing piano at the young age of four, going on to write and perform songs as a teenager at open mic nights. At Regis High School, she played the lead roles of Adelaide in Guys and Dolls and Philia in A Funny Thing Happened on the Way to the Forum, and in the summer enrolled in Creative Arts Camp. For ten years, she studied method acting at Lee Strasberg Theatre and Film Institute, and eventually was cast in a minor role as a high school student in a 2001 episode of The Sopranos.

Two years later, she gained early admission to Collaborative Arts Project 21, a music school at New York University (NYU)'s Tisch School of the Arts, at the age of 17. However, in 2005, she dropped out in order to pursue a career in music.

After a short-lived stint signed to Def Jam records in 2005, Lady Gaga began performing neo-burlesque in clubs on New York City's Lower East Side, and struck up a creative partnership with fellow burlesque artist Lady Starlight. The duo began a live performance art piece, known as "Lady Gaga and the Starlight Revue," which they performed at Lollapalooza Music Festival in 2007.

That September, Gaga began working for Interscope Records as a songwriter, writing for a variety of artists, including Britney Spears, New Kids on the Block, Fergie, and The Pussycat Dolls. When one of her vocal reference tracks was heard by R&B artist Akon, he signed her to his Interscope imprint KonLive.

In 2008, Gaga moved to Los Angeles to work full-time on writing her debut album and on forming the Haus of Gaga; the creative collective responsible for much of the clothing, props, stage sets, and makeup for Gaga's live performances, videos and red carpet appearances.

She released her debut album, The Fame, in August 2008 to critical acclaim and commercial success. The album top the charts in the United Kingdom, Canada, Germany, Ireland, Poland, and Switzerland, as well as reaching number one on the US Top Electronic/Dance albums for 108 non-consecutive weeks, and peaking at number two on the Billboard 200. The Fame became the fifth best-selling album of 2009, and was nominated for a total of five Grammy Awards at the 52nd Grammy Awards, including the Grammy Award for Album of the Year, winning the Grammy Award for Best Electronic/Dance Album and the Grammy Award for Best Dance Recording for the single "Poker Face". The album's first two singles, "Just Dance" and "Poker Face", reached number one in the United States, Australia, Canada and the UK. "Poker Face" was named as the world's best-selling single of 2009, with 9.8 million copies sold that year, and spent a record 83 weeks on Billboard magazine's Digital Songs chart. The Fame also launched the singles "Eh, Eh (Nothing Else I Can Say)", "LoveGame" and "Paparazzi".

In 2009, Lady Gaga opened for the Pussycat Dolls on their Doll Domination Tour, before headlining her worldwide The Fame Ball Tour. Whilst on tour, she wrote eight new songs that featured on a re-release of The Fame titled The Fame Monster. The re-issue's lead single "Bad Romance" hit number one in over 20 countries and peaked at number two on the Billboard Hot 100 chart in the US. The singles "Telephone" and "Alejandro" followed, reaching the top ten in multiple countries around the globe.

2009 was a record-breaking year for Gaga, who spent a record 150 weeks on the UK Singles Chart and later earned an entry in the Guinness Book of World Records when she became the most downloaded female act in a year in the US, with 11.1 million downloads sold.

In November 2009, she embarked upon The Monster Ball Tour, which ran from November 2009 to May 2011 and grossed $227.4 million - the highest-grossing concert tour for a debut headlining artist. She also performed the tour at Madison Square Garden in New York City, which was filmed for an HBO television special titled Lady Gaga Presents the Monster Ball Tour: At Madison Square Garden.

In March 2010, Gaga released The Remix – a remix album of The Fame that went on to become one of the best-selling remix albums of all time. The following month, the video for "Bad Romance" became the most watched video on YouTube, and that October, Gaga became the first person with more than one billion combined views. At the 2010 MTV Awards, she was the most nominated artist for a single year, and the first female to receive two nominations for Video of the Year at the same ceremony. She won eight awards from 13 nominations, including Video of the Year for "Bad Romance".

February 2011 saw the launch of "Born This Way", the lead single from Gaga's studio album of the same name. The single the Guinness World Record for the fastest selling single on iTunes, with more than one million copies sold in just five days, and it debuted at number one on the Billboard Hot 100. "Judas" and "The Edge of Glory" quickly followed, both charting in the top 10 in both the US and UK.

Born This Way was released in May 2011, and debuted at number one on the Billboard 200, selling eight million copies worldwide and earning three Grammy Award nominations, including Gaga's third consecutive nomination for Album of the Year.

That November, Lady Gaga presented her own Thanksgiving special, A Very Gaga Thanksgiving, attracting 5.7 million American viewers and preceding the release of her fourth EP, A Very Gaga Holiday.

Artpop, her third studio album, was released in 2013 and peaked at number one on both the US and UK albums charts. The album launched three singles, including lead single "Applause", which peaked at number six on the Billboard Hot 100.

Her second Thanksgiving special, Lady Gaga and the Muppets Holiday Spectacular, was aired in November 2013.

In September 2014, Lady Gaga released Cheek to Cheek; a collaborative jazz album with traditional pop superstar Tony Bennett. The album was Gaga's third consecutive record to debut atop the Billboard 200. It won a Grammy Award for Best Traditional Pop Vocal Album and was critically acclaimed, with several critics praising Gaga's vocals and change in musical direction.

In February 2015, Lady Gaga performed a tribute to Julie Andrews at the 87th Academy Awards, singing a medley of songs from The Sound of Music. The performance was praised by Billboard and gained over 214,000 interactions per minute globally on Facebook.

Early 2016 brought three memorable televised performances from Gaga: she sang the US national anthem in February at Super Bowl 50, performed a collaborative tribute to David Bowie at the 58th Annual Grammy Awards with Intel and Nile Rodgers, and earned a standing ovation for her performance of "Til It Happens to You" at the 88th Academy Awards, where she was joined on stage by Vice President Joe Biden and 50 people who had suffered from sexual assault.

In April, she was honored by The Grammy Museum at the Jane Ortner Education Awards with the Artist Award for her passion and dedication to education through the arts.

Joanne, Lady Gaga's fourth studio album, was released in October 2016 and when it debuted at the top of the US albums chart, it made her the first woman in the 2010s to reach number one four times on the Billboard 200. The album was nominated for Best Pop Vocal Album at the 60th Annual Grammy Awards, and two of its singles, "Million Reasons" and "Joanne" were nominated for Best Pop Solo Performance; with "Joanne" going on to win the award.

In February 2017, Lady Gaga was the headline act for the Super Bowl LI halftime show. Her performance earned her an Emmy nomination in the Outstanding Special Class Program category.

A Star Is Born, a musical romantic drama film (and remake of the original 1937 film, 1954 musical and the 1976 musical), was released in October 2018 with Lady Gaga playing the starring role of Ally, alongside Bradley Cooper's Jackson "Jack" Maine. Gaga received nominations for an Academy Award, a BAFTA Award, a Golden Globe Award and a Screen Actors Guild for Best Actress, Gaga won Critics' Choice and National Board of Review awards for the role.

The soundtrack for A Star Is Born featured songs performed, co-written and co-produced by Lady Gaga and Bradley Cooper. It debuted at number one on the Billboard 200 (Gaga's fifth consecutive number one on the chart) and launched three singles, including the lead single "Shallow" (a duet between Gaga and Cooper), which earned Gaga an Academy Award, a Golden Globe Award, a Critics' Choice Movie Award for Best Original Song, and two Grammy Awards: Best Pop Duo/Group Performance and Best Song Written for Visual Media. 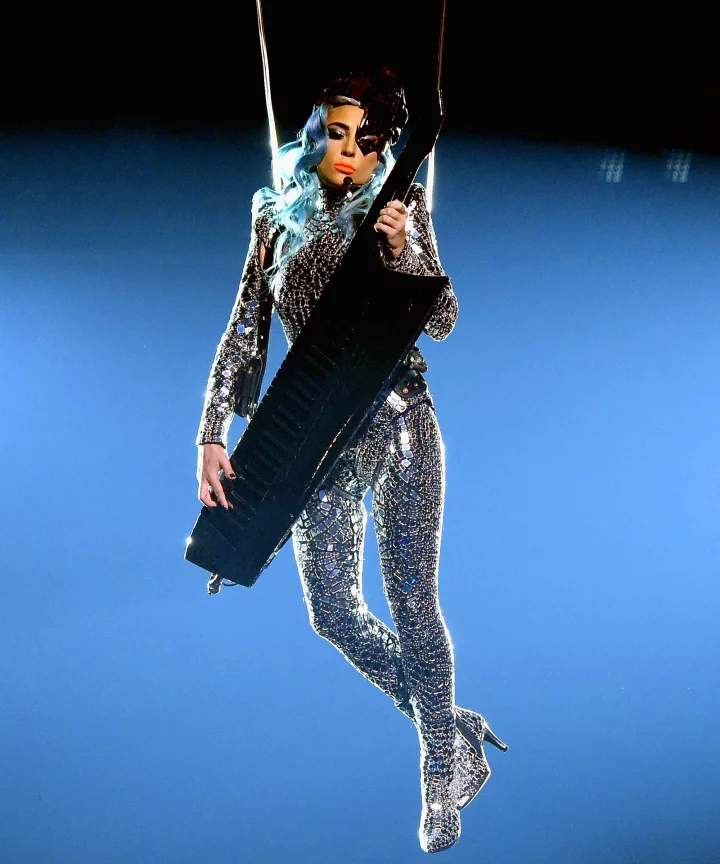 It's hard to imagine a world without Gaga... Labelled the "Queen of Pop" by Rolling Stone, Lady Gaga holds several Guinness world records, nine Grammy Awards, awards from the Songwriters Hall of Fame and the Council of Fashion Designers of America, a BAFTA, an Oscar and a Golden Globe!

One of the world's best-selling artists, she is a true icon who captured the globe's attention with her provocative performance art, outlandish fashion and danceable synth-pop!

Gaga for Gaga...? Click the ticket links for shows in your area!