Ariana Grande-Butera, known simply as Ariana Grande, was born in Boca Raton, Florida on June 26, 1993. The Italian American singer, songwriter, and actress cut her teeth on the stage with Fort Lauderdale Children's Theater, starring as the titular character in the musical Annie, as well as performing in the musicals The Wizard of Oz and Beauty and the Beast. At the tender age of eight, Grande performed at a karaoke lounge on a cruise ship and with several orchestras, including South Florida's Philharmonic, Florida Sunshine Pops and Symphonic Orchestras, and she also sang "The Star-Spangled Banner" for the Florida Panthers in her first national television appearance.

Just five years later, aged 13, Grande decided to pursue a career in music, and in 2007 she met with managers in Los Angeles to discuss her dreams of being an R&B star. In 2008, she made her professional debut in the musical 13, in the supporting role of the cheerleader Charlotte, winning a National Youth Theatre Association Award for her performance.

In 2009, she was cast alongside her 13 co-star Elizabeth Gillies in the Nickelodeon television show Victorious, in the role of Cat Valentine. The popularity of the role brought Grande fame as a teen idol, but despite her success as an actress, she still longed for a career in music. She made her singing debut in 2011 on the track "Give It Up", which featured on the soundtrack Victorious: Music from the Hit TV Show. She was offered a record deal on the strength of her recording, and later that year she released her debut single, "Put Your Hearts Up", which was eventually certified gold by the RIAA. Grande went on to have songs on the next two Victorious soundtracks, and after Victorious went off the air in 2012, she starred in the Victorious spin-off series Sam & Cat, which ran for one season.

Grande released her debut album, Yours Truly, in 2013, debuting at number one on the Billboard 200. The album launched the lead single "The Way", which featured Pittsburgh rapper 9and future boyfriend) Mac Miller and debuted at number ten on the US Billboard Hot 100, eventually peaking at number nine for two weeks. It also also featured the hits "Baby I" and "Right There." Later that year, she recorded the duet "Almost Is Never Enough" with Nathan Sykes of The Wanted and supported Justin Bieber on his Believe Tour. She was ranked at number four on Billboard's annual ranking of the most popular musicians under the age of 21, "Music's Hottest Minors 2013", and also won the award for New Artist of the Year at the 2013 American Music Awards, as well as receiving the 2013 Breakthrough Artist of the Year award from the Music Business Association. She released the four-song Christmas EP, Christmas Kisses in December 2013.

In January 2014, Grande earned the Favorite Breakout Artist award at the People's Choice Awards. That March, she was invited to sing at the White House concert, "Women of Soul: In Performance at the White House," and obviously made an impression on President Barack Obama and First Lady Michelle Obama, who invited her back the next month to perform for the White House's Easter Egg Roll event. Her second studio album, My Everything, was released in August and was her second album in a row to debut atop the Billboard 200. The album's lead single, "Problem" (featuring Australian rapper Iggy Azalea), hit number two on the Billboard Hot 100, and debuted at number one on the UK Singles Chart. It also launched the singles "Break Free" with Zedd and "Love Me Harder" with The Weeknd. "Bang Bang", the lead single from Jessie J's album Sweet Talker, featured guest vocals from Grande and Nicki Minaj, and peaked at number one in the UK and number three in the US, linking Grande with Adele as the only female artist with three top ten singles simultaneously on the Billboard Hot 100 as a lead artist, alongside the singles "Problem" and "Break Free."

Dangerous Woman, Grande's third studio album, came in 2016, featuring collaborations with Nicki Minaj, Lil Wayne, Macy Gray and Future. The album debuted at number two on the Billboard 200 and peaked at number one in the UK, Australia, Brazil, Italy, Ireland, New Zealand, Spain and Taiwan, cementing her position as a global superstar. The album's lead single and title track debuted at number 10 on the Billboard 200, making Grande the first artist ever to have the lead singles from her first three albums debut in the Top 10. That year, she also released the song "Faith" with Stevie Wonder, from the soundtrack of the 2016 film Sing, which was nominated for Best Original Song at the 74th Golden Globe Awards. She also recorded the title track of the soundtrack for the 2017 live-action remake of Disney's Beauty and the Beast with soul star John Legend.

On May 22, 2017, disaster struck when a suicide bomber targeted Grande's Dangerous Woman concert at the Manchester Arena in Manchester, England, causing 23 fatalities and more than 500 injuries. Heartbroken, Grande cancelled the remaining tour dates and held a televised benefit concert One Love Manchester on June 4, raising $23 million to aid the victims of the bombing and their families. She was named the first honorary citizen of Manchester by the City Council in honor of her efforts.

In December 2017, Grande was named "Female Artist of the Year" by Billboard magazine.

2018-present: Sweetener and Thank U, Next

In April 2018, Grande continued her record-setting streak as the only artist to have debuted the first single from each of her first four albums in the top ten of the Hot 100 with "No Tears Left to Cry", the lead single from her fourth studio album, Sweetener. The critically acclaimed, Pharrell produced Sweetener debuted at number one on the Billboard 200 and earned Grande her first Grammy Award for Best Pop Vocal Album.

That November, she released "Thank U, Next", the lead single and title track for her fifth studio album of the same name. "Thank U, Next" debuted at number one on the Billboard Hot 100, becoming Grande's first chart topping single in the United States and continuing her streak of Top 10 debut singles from her first five albums. The song was soon certified platinum by the RIAA and became the fastest song to reach 100 million streams on Spotify in 11 days and most-streamed song by a female artist in a 24-hour period with 9.6 million streams, before it was surpassed by her own song "7 Rings" with nearly 15 million streams. Its music video broke records for most-watched music video on YouTube within 24 hours of release and fastest Vevo video to reach 100 million views on YouTube. "7 Rings" broke several streaming and recording industry records and allowed Grande to become the first solo artist to occupy the top three spots on the Billboard Hot 100 with "7 Rings" at number one, her third single "Break Up with Your Girlfriend, I'm Bored" debuting at number two, and her lead single "Thank U, Next" at number three. Thank U, Next broke records for the largest streaming week for a pop album and for a female album in the United States with 307 million on-demand streams.

At the 2019 MTV Video Music Awards Grande won three awards including the Artist of the Year award. 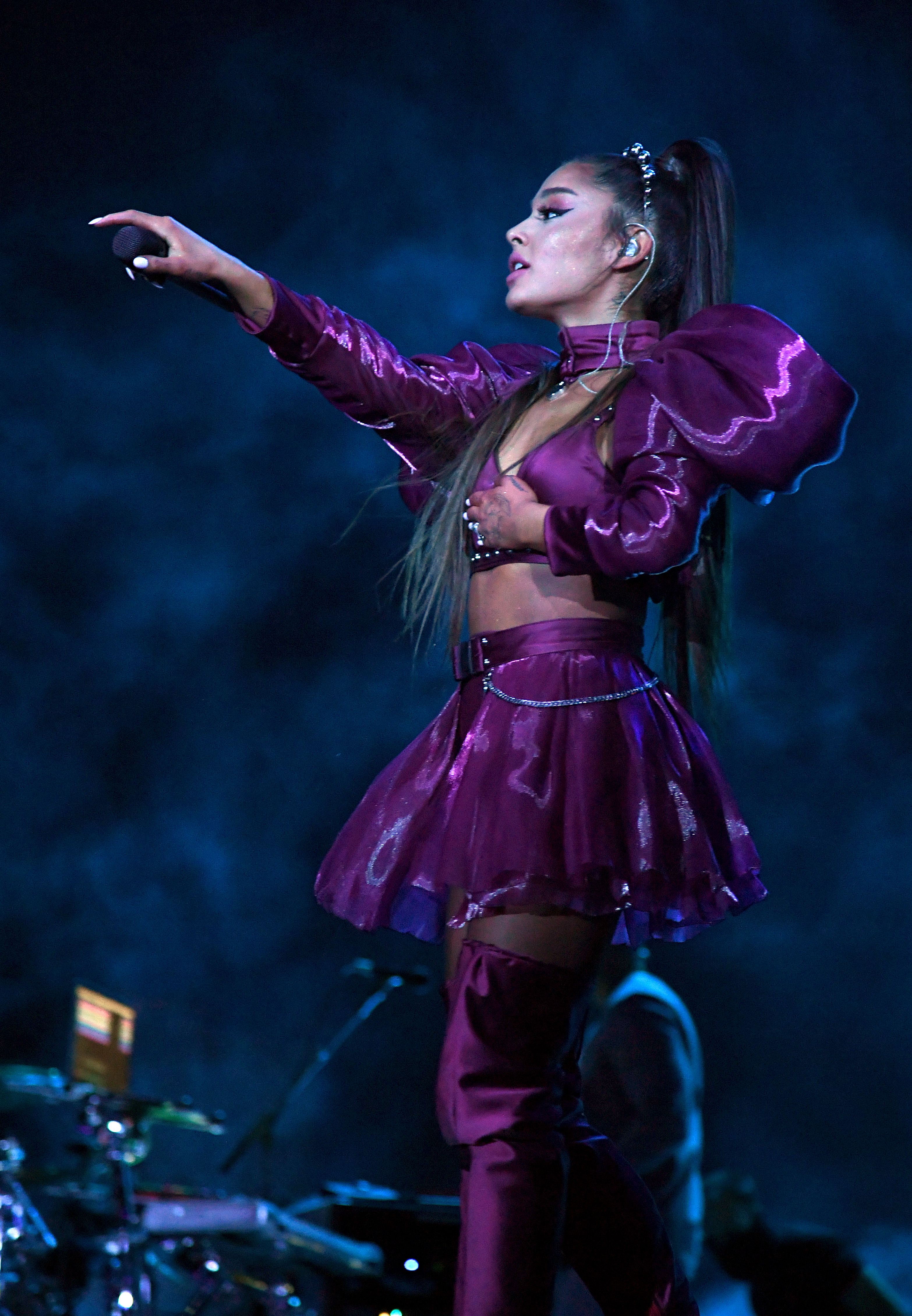 The platinum-selling Grammy Award-winner has drawn attention with her iconic style, and has been named as the most followed woman on Instagram and one of the highest-paid celebrities of 2019! Despite her high-profile status, she remains both down-to-earth and outspoken, and she has been named twice by TIME as one of the 100 most influencial people in the world!

Do you love Ariana? Then click the links for show tickets in your area!