Halsey was born Ashley Frangipane on September 29, 1994 in Edison, New Jersey. A musical child, she played the violin, viola, and cello, and began learning acoustic guitar when she was fourteen years old.

Her parents moved frequently throughout her younger years, and by the time she was a teen, Halsey had attended six different schools. She graduated from Warren Hills Regional High School in Washington, New Jersey in 2012. After graduating, she enrolled in the Rhode Island School of Design, but her time there was short-lived, and she dropped out due to financial hardship. She attended community college for a time, but eventually left her course there as well and was asked to leave home, due to disagreements with her parents. It was around this time that she became involved with a man who lived on Halsey Street in Brooklyn, which is where she came upon her stage name (Halsey is also an anagram of Ashley). After she left home, she moved into in a basement in lower Manhattan, and sometimes stayed in a New York homeless shelter, as well as occasionally staying with her maternal grandmother.

It was during this time in New York that Halsey began to write music, and started posting videos of her songs to YouTube, Kik and, particularly, Tumblr under the username se7enteenblack.

In 2014, she met Dylan Scott, a then-member of the band Young Rising Sons, who invited her to collaborate with him on a song. They write the song "Ghost" together, which she posted onto SoundCloud, gaining hundreds of plays within a few hours. The song caught the attention of several record labels, and eventually charted and gained radio play. One of the labels to make contact was Astralwerks, who she signed with due to the creative freedom that they offered her.

In August 2014, Halsey went on tour with The Kooks as their support act. Two months later, she released her debut EP, Room 93, which charted on the US Billboard 200 and at number three on the Top Heatseekers chart.

In March 2015, her performance at South by Southwest was the most tweeted-about performance of the night. Later that month, she embarked on a co-headlining tour with Young Rising Sons, and in June, she opened for Imagine Dragons on the North American leg of their Smoke + Mirrors Tour.

Badlands, her debut studio album, was released in August 2015 and debuted at number two on the Billboard 200. It was eventually certified platinum by the RIAA, and entered the top 10 in Australia, Canada, Ireland, New Zealand, Netherlands, Scotland, United Kingdom, Belgium, and Portugal. It also launched four singles: "Ghost", "New Americana", "Colors", and "Castle", all of which were certified platinum in the US.

She embarked on her year-long Badlands Tour in September 2015, and in November she also performed as the opening act for select dates of The Weekend's The Madness Fall Tour. That month, she also appeared as a featured singer on the song "The Feeling" on Justin Bieber's fourth studio album, Purpose.

In July 2016, she collaborated with The Chainsmokers on the single "Closer," which she co-wrote and featured on as a vocalist. The song topped the Billboard Hot 100 for 12 consecutive weeks, and topped the charts of 12 other countries, as well as becoming one of most streamed songs on Spotify. It also earned Halsey her first Grammy Award nomination, for Best Pop Duo/Group Performance.

In January 2017, Halsey on the soundtrack of the film Fifty Shades Darker with the single "Not Afraid Anymore". Three months later, she released "Now or Never", the lead single from her second studio album, which peaked at number 17 on the Billboard Hot 100 and was certified double-platinum.

The album itself, Hopeless Fountain Kingdom, was released in June and debuted atop both the Billboard 200 and the Canadian Albums Chart. The album's second single, "Bad at Love", was released in August and peaked at number five on the Hot 100, gaining quadruple-platinum certification.

In September, she embarked on the Hopeless Fountain Kingdom World Tour, and in December, "Him & I", a collaboration with G-Eazy, was released. The song peaked at number 14 on the Billboard Hot 100, and was certified double-platinum by RIAA, as well as charting in the top 10 of 13 other countries.

Halsey was a featured as a musical guest on Saturday Night Live in January 2018, where she performed "Bad at Love" and "Him & I" with G-Eazy. Two months later, she released "Alone", the third and final single from Hopeless Fountain Kingdom, alongside a new version featuring American rapper Big Sean and British rapper Stefflon Don. The track was certified platinum by RIAA and reached number one on Billboard's Dance Club chart.

That June, she featured with Khalid on Benny Blanco's debut single "Eastside", which peaked at number nine on the Billboard Hot 100 and was certified double-platinum in the US, also topping the charts in five other countries.

In October 2018, Halsey had her first number one single on the Billboard Hot 100 with "Without Me". The song topped the chart for two non-consecutive weeks and remained in the top five for 22 weeks, also reaching the top three in the UK, Malaysia, Australia, Canada, New Zealand, and Ireland. It has been certified triple-platinum in the US, platinum in the UK, and five-times-platinum in Australia and Canada.

In early-2019, she collaborated on several tracks with other artists, including: a remix of "Without Me" featuring American rapper Juice WRLD, "11 Minutes" with Yungblud (featuring Travis Barker), and the song "Boy with Luv" by BTS; the music video for which became the most–viewed music video within the first 24 hours on YouTube with 74.6 million views.

Halsey was the host and musical guest for Saturday Night Live on February 9, 2019, and she was praised for her performance, which was reflected in the show's ratings.

In March, she announced her third studio album, Manic, which is slated for released in January 2020. Two months later, she released the standalone single "Nightmare", which debuted in the top fifteen of the Billboard Hot 100. "Graveyard" was released in September as the second single from Manic, followed by "Clementine" later that month, which serves as the album's third single. 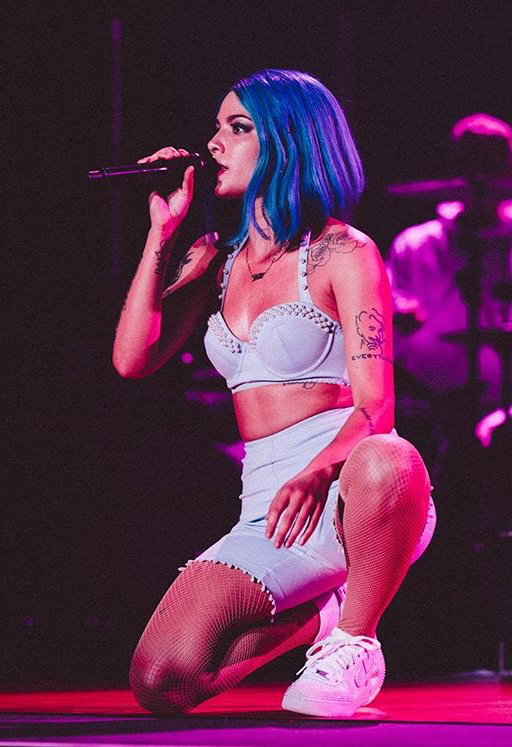 Platinum-selling alt-pop star Halsey is a unique and unapologetic talent whose lyrical craft, flair for melody and delivery of her chart-topping songs have made her an essential part of today's pop landscape! A distinctive voice and introspective, indie-tinged ballads, as well as her industrial-inflected dance tunes, have made her stand out from the crowd, as does her flair for fashion and ability to be utterly herself in a sea of similar faces!

Tickets for Halsey are available now - click the links for shows near you!